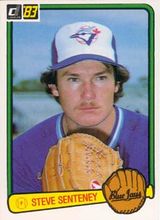 Steve Senteney served in the United States Marine Corps prior to his baseball career. He began his minor league career in the Toronto Blue Jays organization, playing rookie ball with the Medicine Hat Blue Jays. His best minor league seasons came in 1981 and 1982. He went 10-5 in 1981 with the Double A Knoxville Blue Jays and enjoyed a 2.44 ERA with the Triple A Syracuse Chiefs in 1982.

Following his brief stint with the major league Blue Jays in 1982, Senteney pitched another three seasons in the minors in the New York Mets and Pittsburgh Pirates organizations. He died in an automobile accident in June 1989.