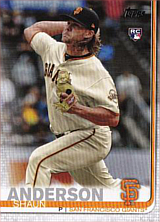 Pitcher Shaun Anderson was a third-round choice by the Boston Red Sox in the 2016 amateur draft, out of the University of Florida. He had earlier been a 40th-round pick by the Washington Nationals out of high school in 2013, but had not signed.

He made his debut in 2016 with the Lowell Spinners of the New York-Penn League, pitching just 2 2/3 innings in 2 games and allowing 9 runs on 12 hits. He did much better in 2017, as he started 3-0, 2.56 with the Greenville Drive of the South Atlantic League, then went 3-3, 3.99 with the Salem Red Sox of the Carolina League. On July 26, he was traded to the San Francisco Giants, along with pitcher Gregory Santos, in return for major leaguer Eduardo Nunez. He finished the year with the San Jose Giants, going 3-3, 3.51 in 6 games in the California League. His combined record between the three stops was 9-6, 3.44. In 2018, he was assigned to the Richmond Flying Squirrels of the Eastern League. He was named to the United States team for the 2018 Futures Game and ended up being credited with the win, even though he gave up a run on a solo homer by Yusniel Díaz during his inning of work; Díaz's homer tied the score at 6 in the 7th, but the U.S. replied with 3 runs in the bottom of the inning and never lost that lead.

Anderson made his major league debut for the Giants on May 15, 2019, facing the Toronto Blue Jays. His opponent on the mound was the center of attention that day, as veteran hurler Edwin Jackson was pitching for his 14th major league team, setting a new record. For his part, Shaun gave up 3 runs (2 earned) on 2 hits in 5 innings but was not involved in the decision as San Francisco won the game, 4-3. In 28 games (16 starts), Shaun was 3-5, 5.44 with 70 strikeouts in 96 innings.

On February 4, 2021, he was traded to the Minnesota Twins in return for OF LaMonte Wade.