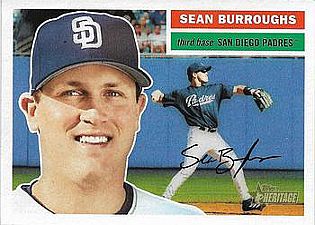 "Sean Burroughs, a third baseman for Team USA in the Olympic Games in Sydney, Australia, has made history today (September 27, 2000). Mr. Burroughs is the first former player from a Little League Baseball World Series championship team to receive an Olympic Medal." - from an article at Little League Online

Sean Burroughs, a first-round draft pick in 1998, played five major league seasons in the early 2000s but failed to become the superstar everyone was expecting. He was of athletic lineage, being the son of former MVP Jeff Burroughs. In November 2010 he made news as he signed a minor-league contract with the Arizona Diamondbacks after being completely out of organized baseball for almost four years. Amazingly, Burroughs made it back to the majors in 2011 for 78 games.

Though he was born in Atlanta (while his father was playing with the Braves) he did not grow up there. He grew up in Southern California and was the star of two Long Beach Little League World Series teams that won titles when Sean was 11 and 12 years old. They were the first US team to repeat as LLWS champs. He was 1-for-4 with a run as the shortstop and leadoff hitter in the 1992 Little League World Series finale; Long Beach lost but was awarded the title when it was discovered that the champion Philippines team used 8 ineligible players, 5 of them in the finale. In the 1993 Little League World Series, Burroughs became the 6th pitcher to throw two shutouts in a Series and the second with two no-hitters (both 16-strikeout gems); he also hit .600. In the finale, though, he played shortstop; he was 0 for 1 with two walks, a run and two errors. His 16 strikeouts in a game were a record until surpassed by Jeff Duda in 1998.

Burroughs explained the five-year gap in his career by the fact he had a drinking problem which kept him from performing at a level corresponding to his abilities. "I was not taking the game seriously," he explained. He kicked the habit in the summer of 2010, started working out again and earned a second chance from D-Backs GM Kevin Towers, who had originally drafted him 12 years earlier. He started 2011 hitting .386 in 27 games with the AAA Reno Aces before getting the call back to the bigs. With Arizona, he hit .273 in 78 games, albeit with little power - only 4 doubles, 1 homer and a .336 slugging percentage. He became a free agent after the season and signed with the Minnesota Twins; he started the 2012 season in the bigs but hit only .118 in April and was sent down to the AAA Rochester Red Wings. He hit .271 in 67 games in the International League, but did not return to the Twin Cities. In 2013, he moved to the Los Angeles Dodgers organization, but continued to regress. He spent the year in AA with the Chattanooga Lookouts, playing only 57 games, hitting .220 with no power. He became a free agent again after the season and called it a day.