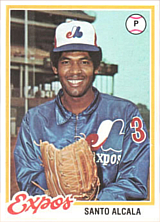 "Things were different back then. The scout who signed me drove over to San Pedro de Macoris and said, 'C'mon, we’re going to Santo Domingo to watch you throw.' I said, 'OK'. I'd never been to the capital before. I threw for him, about 20 pitches, and he said, 'Sorry. You do not throw hard enough for me to sign you.' No radar gun, just his eyes. I wanted to be a professional. We didn't have much money. I said, 'Give me the ball again.' After I got done, he said, 'How about $3000?' I said, 'I'll take it.'" - Santo Alcalá, to the Cincinnati Enquirer, November 2008

Santo Alcalá was one of seven pitchers to post at least 11 wins for the World Champions Cincinnati Reds in 1976, finishing his rookie year with a record of 11-4. He had poor peripheral statistics, such as 67 bases on balls allowed in 132 innings and a 4.70 ERA, and he was not used as the Reds swept both the National League Championship Series and the World Series.

Alcalá was traded to the Montreal Expos on May 21, 1977, in exchange for two minor leaguers, one of whom - Shane Rawley - would go on to win 111 games in the majors. The Expos were to acquire two more veteran starting pitchers in the next three weeks, Stan Bahnsen and Wayne Twitchell, because their starting rotation was rapidly taking water. Alcalá's debut with Montreal was spectacular, as he pitched a perfect 13th inning for his first Major League save on May 24th against the Chicago Cubs at Wrigley Field [1]. Making his first start on May 27th against the St. Louis Cardinals [2], he hit a home run off Larry Dierker in his first at bat as an Expo. It was all downhill from that point, however, as he gave up a grand slam to Ken Reitz that same game and was saddled with the loss, before washing out of the Expos' starting rotation and ending the year pitching in long relief.

He was claimed on waivers by the Seattle Mariners on March 23, 1978, but he never pitched in the Major Leagues again. In 1989, Alcalá pitched one game for the Gold Coast Suns of the Senior Professional Baseball Association. He was pitching coach of the 1997 China Times Eagles.