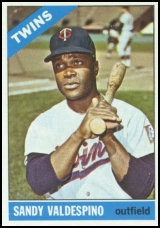 Sandy Valdespino, who played seven seasons in the major leagues, was born in Cuba in 1939 and signed by the Washington Senators in 1957. He came to the majors in 1965 after the Senators had become the Minnesota Twins. He had his most at-bats in a season as a rookie that year. Valdespino started two games of the 1965 World Series against the Los Angeles Dodgers, batting second in the order each time.

Valdespino was relatively short for a ballplayer and got his nickname "Sandy" because Johnny Welaj, who managed Valdespino in the minors, thought he resembled Sandy Amoros. With the Atlanta Crackers in 1964, he led the International League in batting.

Valdespino was a coach for the West Haven Yankees in 1977 and Rochester Red Wings in 1985. He managed Rimini to the 1983 Serie A title.

One source: Sandy Valdespino - has a photo of Valdespino and Bob Allison.