Note: This page is for Ryan Wheeler who made his major league debut in 2012. For other players with the same name, click here. 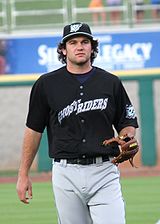 Ryan Wheeler made his major league debut with the Arizona Diamondbacks in 2012.

The Arizona Diamondbacks took Wheeler in the 5th round of the 2009 amateur draft. He was signed by scout Hal Kurtzman and proceeded to tear the cover off the ball in 2009 for the Yakima Bears (.363/.461/.538, 20 2B, 44 R, 37 BB in 64 G) and South Bend Silver Hawks (.345/.472/.552 in 8 G). Despite only playing half the season, he was named Arizona's minor league position player of the year. He led the Northwest League in OBP (30 points ahead of runner-up Vince Belnome), was second in average (.003 behind Jason Ogata), second in slugging (.044 behind Gerardo Avila), led in OPS (35 points ahead of Ogata), tied for third in doubles and tied for 4th in hits (85, even with Nathan Freiman). He won NWL All-Star honors at first base and was presumably a good MVP candidate (Drew Biery won that award). Baseball America listed him as the NWL's 6th-best prospect, right behind another Wheeler (Tim Wheeler) and right ahead of Robbie Ross. They also listed him as Arizona's 9th-best prospect entering 2010.

Wheeler started 2012 explosively with the Reno Aces and hit.351/.388/.572 with 27 doubles, 15 home runs and 90 RBI after 93 games. He was 5th in the Pacific Coast League in average, 5th in slugging and first in RBI. In the 2012 AAA All-Star Game, he hit third and played third for the Pacific Coast League team. He struck out against Tyler Cloyd in the first and Matt Harvey in the third. He singled in the 5th off Rudy Owens. Josh Vitters replaced him at the hot corner and the PCL went on to win, 3-0.

Shortly after appearing in the 2012 AAA All-Star Game, Wheeler made his major league debut with the Diamondbacks, on July 20th, going 1 for 4 with a run scored and a pair of strikeouts in a start at third base and batting 8th against the Houston Astros. He struck out his first two at-bats against Bud Norris then hit into a force at home. His 4th trip up, he singled off Rhiner Cruz and came around later in the inning on a hit by Stephen Drew. The D-Backs quickly indicated that they were seeing him as their third baseman of the future when they traded incumbent Ryan Roberts to the Tampa Bay Rays on July 24th, indicating that Ryan was their man for the future.

Wheeler's brother, Jason Wheeler, followed him to Loyola Marymount University and reached the major leagues in 2017.