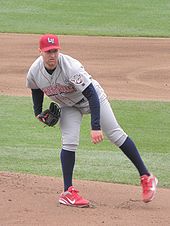 Ryan Feierabend was drafted by the Seattle Mariners in the 3rd round of the 2003 amateur draft. He was signed by scout Ken Madeja and made his pro debut that summer.

Feierabend started in professional ball at the age of 17 in 2003 and made his major league debut in 2006, with an ERA of 3.71 in 4 games that year with the Mariners. He returned to the major leagues with the Texas Rangers on July 13, 2014 after last pitching at that level on September 23, 2008 for Seattle. In the interim, he played in the Mariners, Philadelphia Phillies, Cincinnati Reds and Rangers minor league systems - and also spent time with the independent York Revolution - during his absence from big league ball. His first four major league seasons, from 2006 to 2014, were as a conventional pitcher. He went 2-11, 7.15 during that span.

In 2015 he moved to the Korea Baseball Organization with the Nexen Heroes, then moved to the KT Wiz in 2016, with middling success both years. In 2017, however, he decided to begin using a knuckleball as a side pitch, and he had his most successful season to date in Korea, going 8-10, 3.04 in 26 starts for KT. His ERA went up to 4.30 in 2018, but with a solid strikeout rate, good numbers for a very offensive-friendly circuit.

His performance in Korea was enough to raise the interest of the Toronto Blue Jays, who signed him to a minor league contract before the start of spring training in 2019 and brought him to camp as a non-roster invitee. He started the year in AAA with the Buffalo Bisons and made it back to the majors on May 18th, when he was called up by the Blue Jays to make a start against the Chicago White Sox. Even though he pitched just 4 innings in a 4-1 loss, he was credited with a complete game - the first of his career - as the game was called due to rain after the minimum 4 1/2 innings.