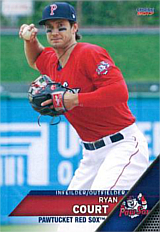 Utility man Ryan Court reached the major leagues with the Seattle Mariners in 2019.

Court was taken by the Arizona Diamondbacks in the 23rd round of the 2011 amateur draft. After two decent years to begin his career, Court hit .315/.421/.496 with 11 home runs, 67 RBI and 38 doubles in 127 games split between the South Bend Silver Hawks, Visalia Rawhide and Mobile BayBears in a breakout 2013. He began 2014 with Visalia and was promoted to the Mobile BayBears before the end of the season, combining for a .259 average, 6 homers and 37 RBI in 107 games. In 2015, he spent the year in the independent American Association, where he hit .331 in 91 games for the Sioux City Explorers.

That solid performance earned him another shot in organized baseball, this time in the Boston Red Sox organization in 2016. He hit .277 in 85 games for the Portland Sea Dogs, which led to his first taste of AAA ball with another 18 games with the Pawtucket Red Sox. He spent all of 2017 with Pawtucket where he hit .263 in 106 games, with 10 homers and 44 RBI. Following the season, he signed as a free agent with his favorite team, the Chicago Cubs and received an invitation to spring training in 2018. He explained that he could not be help it by cheer for the Cubs when they won their historic World Series title in 2016, even though he was a member of the Red Sox organization at the time. He was released before the 2019 season began and joined the Sugar Land Skeeters in the Atlantic League for a month, being purchased by Seattle in May. Following two months with the Tacoma Rainiers, he got the call in July. He got into 12 games that season, hitting .208/.240/.375 with a home run and five RBI. A free agent at the end of the season, he joined the Oakland Athletics organization for 2020.