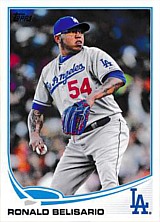 Ronald Belisario posted a 2.04 ERA in 69 games with the division-winning Los Angeles Dodgers in 2009. He was a surprise last-minute addition to the team's 25-man roster after coming to spring training three weeks late because of visa problems, but he pitched lights out in his brief time in the Grapefruit League. Even in the first game of the 2009 season, the Dodgers had him warming up to potentially come in as a reliever. During spring training, he appeared four times, pitched six innings, and gave up no runs. He had six strikeouts while giving up four hits and two walks. Interestingly, some of his appearances occurred after he was assigned to the minor league camp. Belisario was an almost total unknown at the major league level because he had never pitched higher than the AA level in the minors.

Belisario was signed by scout Miguel Garcia for the Florida Marlins in August 1999. He made his pro debut the next summer for Universidad de Carabobo (VSL). He spent 2000-2004 in the Marlins organization, reaching as high as AA, and then had Tommy John surgery which kept him out for the 2005 season. He missed all of 2006 because he was suspended. He did pitch in the Venezuelan Winter League briefly, more than two years after his last minor league appearance. He came back to the minors in 2007 and 2008 in the Pittsburgh Pirates organization and pitched for the AA Altoona Curve both years. He also pitched in Venezuela again in the winter before joining the Dodgers, his performance convincing the Dodgers to give him a shot.

In 2010, Belisario was four weeks late in reporting to spring training with more visa problems caused by a DUI charge in Pasadena, CA, the previous year. He had a difficult season, including a month-long stint out of action while undergoing drug rehabilitation. When he did pitch, he was 3-1, but with a 5.04 ERA in 49 games. He never left Venezuela in 2011 because of visa problems - again - and drug issues, spending the year on the restricted list after he tested positive for cocaine in the offseason. He did receive a visa for the 2012 season, but first had to serve a 25-game suspension for violating Major League Baseball's Joint Drug Program. The suspension was the result of his failure to cooperate with a rehabilitation program following his positive drug test. Belisario has a reputation as a rather poor fielder, with an egregiously bad play against the New York Yankees on June 19, 2013 being an example: with runners on first and second base, he managed to jam Vernon Wells who hit a soft popup towards the mound. Belisario decided to play cute, letting the ball drop in order to get a double play. He then failed to pick up the ball on the first try, let it roll between his legs, then could not remember which base he wanted to throw to; when he settled on throwing to second base, he sent the ball 15 feet wide of the bag and into center field. As a result, everyone was safe, the lead runner scored and the second one made it to third base. He pitched 77 times for the Dodgers that season, going 5-7, 3.97 with a save and logging 68 innings. He was quite busy in the postseason as well, being used three times in the NLDS against the Atlanta Braves, and another four times in the NLCS against the St. Louis Cardinals. He only totaled 3 2/3 innings in those 7 outings, giving up 3 earned runs.

On December 5, 2013, Ronald signed a one-year contract as a free agent with the Chicago White Sox. He had a bit of a trying season in 2014. While he did play the entire season with the team, his record was only 4-8 with a 5.56 ERA. He did save 8 games and pitch 62 games but gave up 78 hits in 66 1/3 innings. He was a free agent again after the season and signed a minor league contract with the Tampa Bay Rays in 2015. He broke his left - non-throwing - shoulder in a swimming incident over the winter in Venezuela; he only had the condition checked when he arrived in spring training, an injury that badly affected his chance of making the team. With a 7.88 ERA in June, he was designated for assignment and subsequently released, catching on with the Boston Red Sox organization for a little under a month. From 2017 to 2019, he pitched for the Leones de Yucatan of the Mexican League.