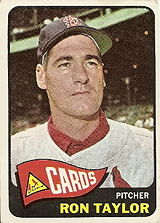 Ron Taylor was the first former Big Leaguer to return to the game as a team physician. [1]

I feel very fortunate because every career I've had, from engineering into major league baseball into medicine, I've just loved what I was doing. Taylor commenting on his varied career choices to the New York Post.

Ron Taylor began his baseball journey playing ball as an eight-year-old in Toronto's Leaside Baseball Association. He was recognized as "a pitching prodigy" [2] as a teenager when he was spotted by a scout for the Cleveland Indians. He was given a contract to play ball in 1956; he intentionally missed the next five spring trainings and joined an Indians' farm team mid-season so he could finish his studies. He graduated from the University of Toronto with a degree in Electrical Engineering in 1961, and joined the Bigs with Cleveland in 1962 at age 24.

He was traded to the St. Louis Cardinals following the 1962 season. He was mostly used as a relief pitcher in St. Louis, and became one of the National League's best relievers. In 1964, he had the most appearances among all pitchers for the Cards, and he also won more games than any other NL relief pitcher that season. St. Louis would go on to win the pennant and the World Series that year, in a tough seven-game battle against the New York Yankees. Taylor made two appearances in the post-season; he also earned the save in Game 4 of the series, holding the Yankees' lineup hitless over four innings.

He was traded to the Houston Astros midway through the 1965 season, but his career was temporarily ended in 1966 after a serious back injury. The New York Mets saw some value in the injured pitcher, and purchased his contract prior to the 1967 season. He would quickly find his groove and led the Mets in both appearances and saves for the next three years (from 1967 to 1969). The Mets won the NL East Division in 1969, thanks in part to Taylor's help in the division-clinching game. In the NLCS that year, New York swept the Atlanta Braves in three straight games; Taylor would get a save in the first game and a win in the second.

The Mets were the underdogs in the 1969 World Series against the Baltimore Orioles. Taylor made two appearances, notably helping the Mets to a win in Game 2 by getting Brooks Robinson to ground out to third to end the game. With Taylor's help, the Mets would win the World Series in five games.

The first part of his baseball career ended in 1972 following a brief stint with the San Diego Padres. He would leave as a pitcher with 491 game appearances and having pitched nearly 800 innings. He finished with 45 wins, 43 losses and 72 saves to his name. He ended with an ERA of 3.93 over his time spent in the Majors.

Ron Taylor visited the troops in Vietnam as part of a USO tour in 1969, meeting several Army doctors there and befriending two of them. He credits this visit as sparking his interest in medicine. He discussed going to medical school with Padres' teammate Cito Gaston, who didn't believe him.

Taylor later returned to school at age 35, and earned a medical degree from the University of Toronto in 1977. During his first visit to the medical school at the U of T, the Dean tried to discourage him from changing careers at that point in his life, but he felt that one part of his career "had died a natural death" and that it was time to move on. He became the long-time team doctor for the Toronto Blue Jays in 1979.

As of 2009, he was still practicing medicine; he still worked for the Blue Jays, and he also maintained an independent medical practice in Toronto. Dr. Taylor is also a lecturer at his alma mater. As well, he helped establish the S.C. Cooper Family Sports Medicine Clinic at Toronto's Mount Sinai hospital. 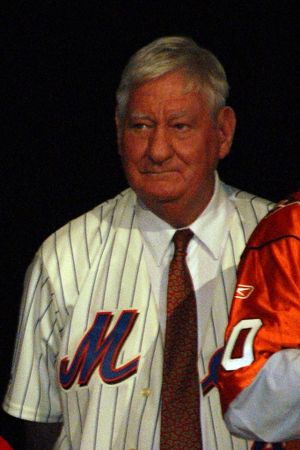 Dr. Taylor was interviewed by the US Government's House Committee on Oversight and Government Reform as part of the committee's investigation into "allegations of steroid use by Major League Baseball players" [3] on February 4, 2008 via teleconference. He was asked about being the Blue Jays' team doctor in 1997 and 1998, when Roger Clemens was with the team. According to his testimony, Clemens was very healthy, suffering only from the usual orthopedic problems seen in pitchers. The Doctor did admit to injecting Clemens with a vitamin B12 shot, and later seeing him for a mass at the area of the injection. He said he had never injected Clemens with a steroid, and commented on the possible problems that arise if a trainer administers a steroid shot (which was not common practice, as only the team physicians would give injections to the players).

The first of the 76 home runs that Taylor gave up was a historic one: it is still the only time in MLB history that a scoreless tie was broken with a walkoff grand slam in the 12th inning. (This has never happened in a later inning either). It ended the Boston versus Cleveland game of April 11, 1962: Carroll Hardy drove in Carl Yastrzemski, Frank Malzone and Russ Nixon for a 4-0 win.

Ron has been honored several times in Canada for his accomplishments. He was named to the Canadian Baseball Hall of Fame in 1985 for his pitching abilities, and was also named to the Canada Sports Hall of Fame in 1993. He was also named to the Order of Ontario in 2003 for his accomplishments; "The men and women who are being honoured are stellar examples of the best and the brightest in this province," said His Honour (The Honourable James K. Bartleman, Lieutenant Governor of Ontario). "They are exemplary role models for us all." [4] Dr. Taylor was also inducted into Ontario Sport Legends Hall of Fame in a ceremony on September 9, 2010. [5]

His son Drew Taylor played for the Toronto Maple Leafs in the Intercounty Baseball League. His younger son Matthew Taylor studied film and history at Queen's University in Kingston, ON, and went on to build a career in film. Neither of his children was pushed into baseball, Ron let them decide what they wanted to do.

Ron is married to Rona Taylor. He plans to work until at least age 75, or until "he loses his marbles" he jokes in a recent book. [6]