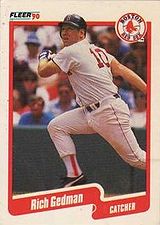 Rich Gedman was signed as an amateur free agent by the Boston Red Sox and scout Bill Enos.

He first came up in 1980 for a 9-game trial at the end of the season, the in 1981 became the Red Sox's starting catcher when future Hall of Famer Carlton Fisk left unexpectedly when a botched contract offer made him a free agent. He played 62 games in the strike-shortened season, hitting .288 and was named the American League rookie player of the year by The Sporting News. His career was off to a good start, and he hit .294 in 1983, then developed some home run power, hitting 24 in 1984 after hitting all of 11 in his first four seasons. He had his best year in 1985, when he hit .295 with 18 homers and 80 RBIs, made the All-Star team for the first time and had an OPS+ of 126.

He was the starting catcher on Boston's World Series team in 1986, hitting .258 with 16 homers and 65 RBIs in 135 games. He made the All-Star team for the second straight year and was considered one of the top catchers in baseball. He hit free agency after that season but was a victim of collusion, not finding a taker and having to re-sign with Boston after missing the first month of the 1987 season. However, while other stars like Andre Dawson and Tim Raines had huge years after finally finding a team post-collusion, Gedman had his worst season, hitting .205 in 52 games, and never coming close to matching his earlier production. In his final six seasons, his highest batting average was just .231. He finished his career with the Houston Astros in 1990 and the St. Louis Cardinals in 1991 and 1992, but was strictly a back-up by that point.

As a Little Leaguer, he was a pitcher, catcher and shortstop. He was a two-time little league All-Star pick.

His son, Matt Gedman, played in the Boston Red Sox minor league system. Another son, Mike Gedman, played for the Worcester Tornadoes in 2011. His wife Sherry pitched for the University of Connecticut softball team, throwing two no-hitters and finishing with a 0.57 career ERA.