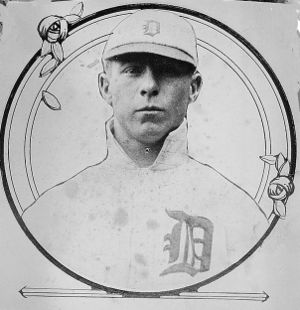 The father of John Corriden, Red Corriden played parts of five seasons in the majors and was the regular shortstop for the Chicago Cubs in 1914. His playing career started in semipro ball in Keokuk, IA and he came to the majors with the St. Louis Browns in 1910. At the end of that season, he was a key player in the fixing of the 1910 batting title going to Napoleon Lajoie. Playing third base for the Browns against Lajoie's Cleveland Naps in a doubleheader on October 9th, manager Jack O'Connor ordered Red to play insanely far back every time Nap made a plate appearance. This allowed Lajoie to rack up a triple and seven bunt hits in an 8-for-8 day and pass Ty Cobb for the batting crown. With a brand new Chalmers automobile on the line for the winner, O'Connor's disdain for "The Georgia Peach" led him to scheme and keep it away from him (fat lot of good it did; in the ensuing controversy, both men were given cars). Ban Johnson stuck his nose in the muck and cleared Corriden of any wrongdoing, declared Cobb the rightful batting champ from phantom hits he discovered, and blackballed O'Connor from organized ball. Interestingly, Corriden would be Cobb's teammate in 1912.

After his major league playing days ended with the Cubs in 1915, he played for several minor league clubs. He was a minor league manager after that and a coach for the Minneapolis Millers from 1925-1927 and Indianapolis Indians from 1928-1929. After scouting for the Cubs in 1931, Corriden was a Cubs coach from 1932 to 1940. He was a member of the Brooklyn Dodgers staff from 1941 to 1946 and the New York Yankees staff in 1947 and 1948. He joined the Chicago White Sox as a coach in 1950 and replaced fired manager Jack Onslow in mid-season. Finally, he scouted for the Brooklyn Dodgers/Los Angeles Dodgers from 1951 to 1958.