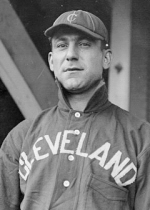 "Ten years of .350 hitting or better! None but Ty Cobb may ever hope to equal that record." - from Baseball Magazine in 1916

"What Lajoie was to infielders, Zach Wheat is to outfielders . . ." - Baseball Magazine in 1917, describing Lajoie as the quintessential infielder

The first second baseman inducted into the Hall of Fame, Nap Lajoie played for 21 years, and helped bring the American League from infancy to respectability. His score on the Black Ink test of appraising ballplayers puts him at # 8 on the all-time list.

He was born September 5, 1874, in Woonsocket, Rhode Island. He was the youngest of eight children of French-Canadian parents. The correct pronunciation of his name was "LaJwa" or "lajaway". Unlike with most others, nobody ever stuck him with a colorful nickname, so he was usually referred to as Nap or Larry.

He was raised by his mother because his father died when he was five. When he was young, he worked in the cotton mills around Woonsocket, and his interest in baseball began when he was about 10 years old. The professional baseball heroes of the day made a huge impression on him, he mentioned idolizing King Kelly, Old Hoss Radbourn, John Montgomery Ward, and John Clarkson.

Larry played semi-pro ball in Rhode Island in 1895. He was a catcher, first baseman, and outfielder in those days. While playing semi-pro ball, he was approached by Charley Marston, manager of the Fall River team in the New England League. Gene Steere had recommended him to Marston. Marston offered Lajoie $100 per month to sign with his club for the 1896 season, and the 20-year-old Nap jumped at the offer. He played in 80 games for Fall River, primarily as an outfielder, and batted .429 (the highest in the league). He had 163 hits, 94 runs scored, 34 doubles, 16 triples, and 16 HR (a huge total for pre-1900 baseball). His performance that year didn't impress a Boston scout too much, who reported that Nap did not appear to be a good hitter. His Fall River manager was impressed though, and Marston offered Lajoie to Philadelphia along with an outfielder named Phil Geier. So, after only three months in the minors, Nap was in the show.

So in this 1896 season, Lajoie joined the Philadelphia Phillies for the last 39 games of the season. He joined the eighth place Philadelphia team that included Dan Brouthers and Ed Delahanty. Nap was immediately put at first base. Brouthers was the former first baseman, and had just recently quit the team, and his replacement Delahanty was more than happy that Nap came along. Now he could move back to the outfield where he was most comfortable. In these 39 games, Lajoie hit. 326 with 57 hits. It became clear that a regular spot needed to be found in the lineup for the youngster. George Stallings became the manager in 1897, Nap's first full season in the bigs. Philadelphia dropped to 10th place, but Lajoie batted .361, an average that he would best seven times later on.

Figures from that 1897 season credit Lajoie with either 8 or 9 home runs. Some sources gave him the home run championship with 10, whereas others credit Hugh Duffy of Boston with 11 round trippers. Stats prior to the turn of the century should be treated with caution. The important point, is that at 22 years old, Nap had established himself as one of the best hitters in the NL.

Part of his success was due to his specially designed bat. His bat, designed by the J.F. Hillerich Company, had two knobs at the end, which enabled him to perfect his split-hands grip. It gave Nap great bat control and allowed him to place the ball where he wanted almost at will. It was the true art of hitting before home runs were in vogue. 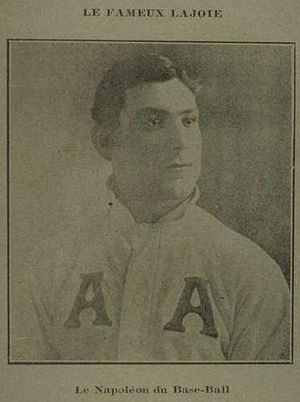 His old team, the Philadelphia Phillies obtained a court injunction that would prohibit him from playing with any other club in Philadelphia, effective on opening day of 1902. Once the injunction was in effect, Connie Mack saw no reason to hurt Lajoie or the rest of the AL, and Nap was allowed to join Cleveland so that he could play every game except those in Philadelphia.

Lajoie established himself as the best second baseman in the game, leading the league in fielding six times. Although he wasn't exceptionally fast compared to other speedsters of the time, he stole 380 bases in his career, with a high of 29 in 1904. His success in Cleveland earned him a managerial spot starting in 1905, and the team became known as the Cleveland Naps. He never won a pennant during his career, the closest he came was in 1908, when Cleveland finished a mere .5 game behind leading Detroit. 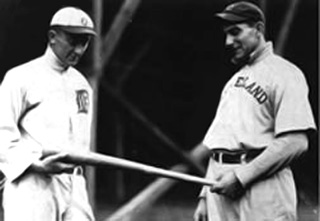 His managing and playing duties seemed to hurt his performance. In 1910 though, he was free from all managerial duties, and the 35-year old Nap beat out 23 year old Cobb by one point in the batting race (.384 to .383). Cobb had sat out the final two games of the 1910 season, hoping to hold on to his lead, but Lajoie played in a season ending doubleheader, and racked up eight hits, six of which were bunts. The St. Louis manager had his third baseman playing deeper than usual. Draw your own conclusions. This bunt "scandal" took on a life of its own, and each player received a new Chalmers car.

In 1917 at age 42, he was player-manager with the Toronto team of the International League, and hit .380 with 221 hits. That year, he won his only championship in baseball. He led the 1917 IL in doubles (39, 7 ahead of George Whiteman and Hack Eibel), average (24 points ahead of Ross Youngs) and hits (3 more than runner-up Turner Barber). It was the best average in the IL in 20 years, when the league had been known as the Eastern League; on that occasion, it was also a future Hall of Famer who had wound his way down from the majors, former Lajoie teammate Brouthers. In 1918, he managed Indianapolis in the American Association and batted .282. This was his final year ever swinging a stick.

He ran for sheriff of Cuyahoga County in Ohio, but lost the election and soon after put politics aside. After a few years as a salesman for a rubber company, he and his wife, Myrtle, retired to Florida in 1925. He died in Daytona Beach, FL on February 7, 1959.

He was elected to the Baseball Hall of Fame on January 19, 1937 by the Baseball Writers Association of America.

"Lajoie was one of the most rugged hitters I ever faced. He'd take your leg off with a line drive, turn the third baseman around like a swinging door and powder the hand of the left fielder." - Cy Young

His record for Doubles by a right handed batter, career, 657 was bested by Craig Biggio who finished with 668.