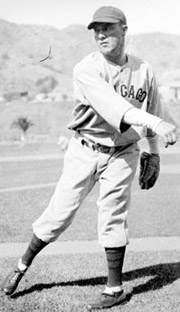 "Pat Malone is nearly forgotten in Cub and baseball history, yet he was a two-time 20-game winner, a key part of two Cub pennant winners, and he won 18 games in his rookie season, 1929. . ." - from the website The Top 100 Cubs of All Time, which chooses Pat Malone as # 67

Perce "Pat" Malone had a winning percentage of nearly .600 during a decade years in the majors. He twice led the National League in victories and was in three World Series.

Born in Altoona, Pennsylvania in 1902, Malone played football for Juniata College after a stint in the army. He began his pro career with the Knoxville Pioneers in 1921, going 13-12. Over the next several years, he had mixed success but triumphed in 1926 when he went 28-13 for the Des Moines Demons, a team whose player-manager was Shano Collins. The next summer, 1927, he went 20-18 for the Minneapolis Millers before joining the Chicago Cubs in 1928.

In his rookie campaign with the Cubs, Malone lost his first 5 decisions but bounced back to finish with an 18-13 record and a 2.84 ERA, sixth best in the NL. He also led his team in victories. The next year, 1929, he led the Senior Circuit with 22 wins, 166 strikeouts, and 6 shutouts as Chicago won the pennant. However, he was 0-2 in the World Series as his team fell to the Philadelphia Athletics. In 1930, he again led the NL with 22 wins while completing a league-high 22 games, but the Cubs fell to second place.

After the 1934 campaign, Malone was traded to the St. Louis Cardinals. However, he immediately clashed with Branch Rickey over his salary and was sold to the New York Yankees before the start of the 1935 season. Unable to crack a Yankees rotation that included Lefty Gomez and Red Ruffing, he was moved to the bullpen, where he found success in 1936. That year, he won 12 games and led the American League with 9 saves. Playing in the third World Series of his career that fall, he earned a save in Game 3 but took the loss in Game 5. Nonetheless, the Yanks defeated the crosstown New York Giants in 6 games.

"Pat was always the life of the party . . . He liked the night life of a big city . . ." - from an article in the January 21, 1938 New York Post titled "Yank Roster Doesn't Look Quite the Same Without Old Blubber Pat Malone"

The Top 100 Cubs of All Time website states that Malone had a problem with the bottle, and was a drinking buddy of Hack Wilson. He was also well known for playing pranks on his teammates.

After baseball, Malone was a farmer and ran a restaurant in his hometown of Altoona. He died at age 40 from pancreatitis, only a few years after his professional baseball career ended.

"Always cocky and supremely confident of his ability, Malone had boasted before the Series that his fastball would knock the bats out of the Athletics' hands." - from the book Chicago in the World Series, 1903-2005, about Pat Malone during the 1929 World Series