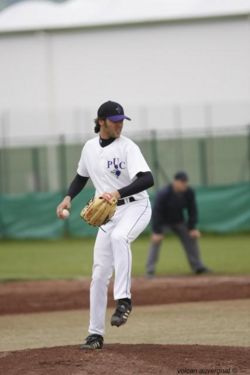 Paris UC pitcher faces the Arvernes team in May 2008

The Paris Université Club play in Division Élite. They have been the most successful club in league history, sporting 19 titles through 2007. Unfortunately, they finished last in both 2007 and 2008 and were relegated out of Division Élite, but have since returned to the top level and finished second in 2014. They won Bronze in the 1993 European Cup, the first French team to win a Medal in Cup history.

PUC play their games at Stade Pershing, located in the Bois de Vincennes Forest at the eastern edge of Paris. They won the European Cup Pool B in 1986, the first French team to win a European trophy. They are managed by American Kieran Mattison. Jeff Stoeckel previously served as manager.