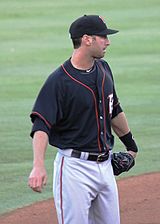 Nick Noonan was a supplemental first-round draft pick in 2007.

Noonan had hit .376 as a freshman and .419 with 12 homers as a sophomore in high school. As a junior, he hit .491 with 30 steals. Baseball America named him as one of three junior position players to make their All-American high school team; Noonan and Michael Burgess were the lone juniors to crack the third team. Noonan was rated the top prospect in the San Diego, CA area by Baseball America and made the AFLAC All-American Classic. In 2007, Noonan batted .540 with 15 HR, 42 steals in 44 tries and 55 RBI. USA Today named him to their All-USA second team infield.

The San Francisco Giants took Noonan with the 32nd pick in the 2007 amateur draft. He was signed by scout Ray Krawczyk and debuted with the AZL Giants, hitting .316/.357/.451 with 18 stolen bases in 21 attempts and 40 RBI in 52 games. He was 7th in the Arizona League in average and steals and second to only Andrew D'Alessio in RBI. He made the AZL All-Star team at shortstop.

Noonan made his major league debut with the Giants on April 3, 2013, as a pinch-hitter, grounding out for Chad Gaudin against the Los Angeles Dodgers' Brandon League in the 9th inning of a 5-3 win by the Giants. In his first big league start at second base, against the Chicago Cubs at Wrigley Field on April 11th, he singled in his first three at bats and was at the heart a four-run outburst in the 5th, followed by a three-run inning in the 5th as the Giants won, 7-6.