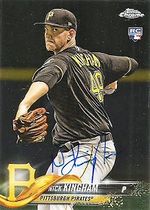 Nick Kingham made his pro debut in 2010.

Kingham was 8-3 with a 2.01 ERA as a high school senior, hitting 93 on the radar gun. The Pittsburgh Pirates took him in the fourth round of the 2010 amateur draft. They signed him in August, their first above-slot bonus among their 22 signees to that point, with a $480,000 bonus. Kingham had a University of Oregon scholarship that he turned down to sign. With the 2010 GCL Pirates, he threw three shutout innings. It took hom a while to climb up to the majors, however. Like many pitchers, his progression was derailed by arm woes. He was doing well until then, making it to AAA in 2014 and pitching well for the Indianapolis Indians. However, after starting the 2015 season back with Indianapolis, he experienced elbow problems and had to undergo Tommy John surgery in May. He did not return until 2016, when he made just 10 starts. It was just in 2017 when he returned to where he had been before the injury, as he went 9-6, 4.13 in 20 games for Indianapolis (he also pitched briefly for the Class A Bradenton Marauders that season).

After starting 2018 back in Indianapolis and going 2-1, 1.59 in his first 4 starts, he received the long-awaited call to Pittsburgh to be added to the team as the Bucs needed an additional starting pitcher following a scheduled doubleheader on April 27th. His debut came two days later, on April 29th against the St. Louis Cardinals. It was a beauty, as he retired the first 20 batters before allowing his first and only baserunner, Paul DeJong, who singled with two outs in the 7th. He left after retiring the next batter, Marcell Ozuna, finishing his day with 7 innings, 1 hit allowed, no walks and 9 strikeouts; he was credited with his team's 5-0 win. Even more remarkably, he relied a lot on a slider that he had been throwing for only a month. No pitcher since 1974 had begun his major league debut with as many as six perfect innings, so it was truly an exceptional performance. The plan was originally to send him back to AAA after his debut, but given the quality of his outing, the Pirates decided to keep him around for at least another start, moving Steven Brault to the bullpen instead.