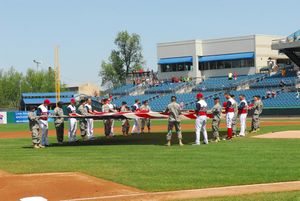 Formerly known as P&C Stadium and Alliance Bank Stadium, NBT Bank Stadium is located in Syracuse, NY and is home to the Syracuse Mets (formerly [Syracuse Chiefs]] and Syracuse SkyChiefs) of the International League.

P&C Stadium opened in 1997 as the new home of the Syracuse SkyChiefs, who as the Chiefs had played next door at MacArthur Stadium for many years. When P&C, a regional grocery chain, went into bankruptcy proceedings in the early 2000s, the company relinquished its naming rights, after which the park was renamed Alliance Bank Stadium. In turn, the SkyChiefs reverted back to the traditional Chiefs name in 2007. Before the 2013 season, Alliance Bank merged with NBT Bank, who then took over the naming rights. In 2019, the traditional Chiefs moniker was abandoned when the team was renamed the Syracuse Mets after a switch of affiliation.

One of the main characteristic of the ballpark is that an active railroad track runs just behind the left field fence. It is used extensively for freight train traffic, and long convoys can be seen and heard passing by throughout the games. In recent years, the name "Chiefs" refered to the railroad (it was previously a reference to American Indians), with one of the team's two mascots being an old-time railroad station chief, dressed in the striped uniform commonly associated with railroad workers in the 19th century. The ballpark is also on the flight path of planes landing or taking off from nearby Syracuse International Airport, and these can also be seen easily. The name "SkyChiefs" referred to those airplanes.