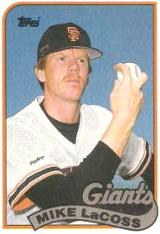 Mike LaCoss, like many members of Roger Craig's pitching staffs, was known for a split-finger fastball. He won 98 games in the major leagues and was known as a practical joker. As a high school senior, he allowed 2 earned runs in 50 innings. He was picked by the Cincinnati Reds in the third round of the 1974 amateur draft and was assigned to the Billings Mustangs, where he went 6-5 with a 2.79 ERA, 8th in the Pioneer League.

He was picked up by the Kansas City Royals in 1985 and had a 1-1 record with a 5.09 ERA in 21 relief appearances then was demoted to the Omaha Royals, where he went 1-2, 3.22. As a result, he missed the Royals' run to the World Championship that year. Kansas City let him go and he signed with the San Francisco Giants.

Reviewing videotapes of his time with Cincinnati, LaCoss adjusted his delivery and had a rebound season at 10-13, 3.57 in 1986. He hit his only career home runs in consecutive at-bats though in different games. The first was on June 23rd that year off utility player Dane Iorg, who was pitching at the end of a 18-1 Giants win. Six days later, in his first at-bat, he homered off Tom Browning. He had a 13-10, 3.68 year for the Giants in 1987 and made the playoffs for the second time. He was 9th in the 1987 NL in wins, his highest finish in the majors. He was an average pitcher in both W-L and ERA over the 1988-1989 time period but appeared in his only World Series, the 1989 Fall Classic, which the Giants lost to the Oakland Athletics.

LaCoss was a coach for the Brevard County Manatees in 2002.