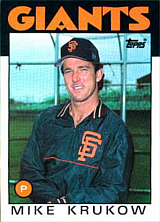 Mike Krukow pitched 14 years in the majors, and in his best year, he was a 20-game winner and an All-Star.

Originally drafted by the California Angels in the 32nd round of the 1970 amateur draft, Krukow did not sign, opting to attend Cal Poly San Luis Obispo instead. In three years of school, he posted a 1.94 ERA, which is still a school record. Behind Hall of Famer Ozzie Smith and Thornton Lee, he is perhaps the third-most prominent major leaguer to come out of Cal Poly.

Krukow was chosen by the Chicago Cubs in the eighth round of the 1973 amateur draft and made his pro debut that summer with the GCL Cubs, going 4-3 and leading the Gulf Coast League with 80 strikeouts. After playing for the Wichita Aeros in 1976, he earned a September call-up to the majors, appearing in 2 games for the Cubs. He earned a spot in the Chicago rotation the following year, 1977, going 8-14 with a 4.40 ERA. He remained with the team for five full seasons, averaging 9 wins a year. Following the 1981 season, he was traded to the Philadelphia Phillies for Keith Moreland, Dickie Noles and Dan Larson. In 33 starts for the Phillies in 1982, he went 13-11 with a 3.12 ERA.

Krukow was then dealt again, this time to the San Francisco Giants. He posted a winning percentage just under .500 in his first three years with the Giants, before having his finest season in 1986. That year, he went 20-9 with a career-best 3.05 ERA and a career-high 178 strikeouts. He appeared in the All-Star Game, pitching a scoreless 9th inning, and finished third in Cy Young Award voting behind Mike Scott and Fernando Valenzuela. He struggled with the Giants in 1987, going 5-6 with a 4.80 ERA. However, he pitched well in the postseason, starting Game 4 of the NLCS and earning a complete-game win. He remained with San Francisco through 1989, when his career ended because of arm trouble.

Cubs manager Preston Gomez had a habit of mispronouncing his name as "kook-row." Krukow's uncle, Tim Ryan, played in the Pittsburgh Pirates chain in 1949.

Along with fellow ex-big leaguer Duane Kuiper, Krukow has been a broadcaster for the San Francisco Giants since 1994. The duo were also the voices of EA Sports MVP Baseball video game series, running from 2003 to 2005. Among other things, he became noted for his use of insider slang.