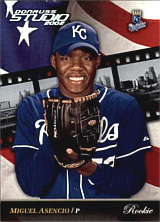 Pitcher Miguel Asencio was signed by the Philadelphia Phillies in 1998. After going 12-5 and posting the best ERA in the Florida State League, 2.84, with the Clearwater Phillies in 2001, he was selected by the Kansas City Royals in the 2001 Rule V Draft. He spent the entire 2002 campaign in KC, posting a 4-7 record with a 5.11 ERA in 31 games. His major league debut was quite inauspicious: brought in to open the 8th inning with the Royals trailing the Cleveland Indians 9-0 on April 6, he walked the first batter he faced, Kenny Lofton on 4 pitches, then managed to do the same to the next three batters; he left the game after throwing 16 pitches, all of them balls. The next year, he was 2-1 with a 5.21 ERA in 8 starts for the Royals before suffering an elbow injury in May. He missed the entire 2004 campaign after undergoing Tommy John surgery and became a free agent that winter.

Ascencio was signed by the San Diego Padres in 2005. After starting the season on the disabled list, he made four starts in the minors before being released in July. He was signed by the Colorado Rockies in early 2006 and spent most of the year with the Colorado Springs Sky Sox, going 8-7 with a 5.03 ERA in 38 games. He made it back to the majors with the Rockies in April, appearing in 3 games and posting a 1-0 record and a 4.70 ERA. After the season, he was traded to the Houston Astros and he spent the entire 2007 season in their organization. He split 2008 between Double A and Triple A in the Boston Red Sox organization, his final season.