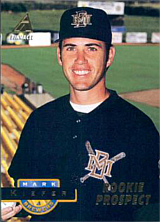 Pitcher Mark Kiefer played parts of four seasons in the majors and had his greatest success playing in Asia.

The younger brother of big leaguer Steve Kiefer, Mark was selected by the Milwaukee Brewers in the 21st round of the 1987 amateur draft. He made his pro debut in 1988, and playing for the Denver Zephyrs four years later, he led the 1992 American Association with 145 strikeouts. He reached the majors with the Brewers in 1993 and made 44 appearances in the bigs over the next four summers. In July 1996, he was traded to the Kansas City Royals for Chris Eddy.

Following the 1996 season, Kiefer became a free agent, and he spent the next four years playing in Taiwan. On May 8, 1997, he no-hit the Mercuries Tigers for the third no-hitter in CPBL history (following Chieh-Jen Yang and Ravelo Manzanillo). In 2000, he went 20-3 with a 1.62 ERA for the Sinon Bulls and was named Chinese Professional Baseball League Most Valuable Player; he was the third foreigner to win the award but the first foreign starting pitcher to do so. He returned to the U.S. the following season, pitching for the Las Vegas 51s and leading the 2001 Pacific Coast League with 174 strikeouts. He returned to Asia the next year, going 19-9 for the KIA Tigers and leading the Korea Baseball Organization in wins.