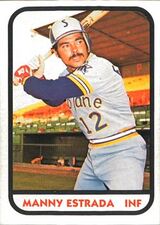 Manny Estrada was an All-Star in AAA yet never made the majors.

Making it to AAA his third season, he seemingly had a good shot at the majors - but he would remain at that level for nine years, never making it to The Show. In his AAA debut, he hit .300/.367/.431 with 30 doubles and 89 runs for the Denver Bears. He missed the 1975 American Association top-10 in average by .002 behind Tommy Smith, he was 3rd in runs (behind Mike Adams and Dave Rosello) and he tied Héctor Cruz for 2nd in doubles (behind Lamar Johnson's 35), though he led the league's second basemen with 28 errors. He led White Sox farmhands in runs (two ahead of Tony La Russa), was 2nd to Johnson in hits, tied Cleo Kirkpatrick for 3rd in doubles and was 9th in walks. He was named the AA's All-Star second baseman, joining Johnson, Rosello and Cruz on the infield. [4] Jorge Orta was having a fine season for the 1975 White Sox, though, so Estrada did not get the call-up.

He managed the Butte Copper Kings to a 38-32 record in 1984 then went into scouting. Among his signees have been Josh Bell, Noel Cuevas, Iván DeJesús Jr., Jon García and Andrés Santiago. His son Justin Estrada was drafted but opted for soccer in college. [7]