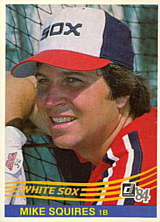 Best known for his defensive skills, first baseman Mike Squires played his entire career with the Chicago White Sox. After his playing days, he became a coach, scout, and front office executive.

Squires was selected by the White Sox in the 18th round of the 1973 amateur draft. With the Knoxville Knox Sox in 1975, he hit .304 and was named Southern League MVP before earning a late-season call-up. After spending the majority of the next three summers with the Iowa Oaks, he joined the White Sox full-time. In 1980, he appeared in two games behind the plate, becoming the first left-hander to play catcher since Dale Long in 1958. The next year, 1981 he won a Gold Glove as the regular first baseman for the ChiSox.

Squires was part of a three-man platoon at first base for the division-winning White Sox in 1983. Each of Squires, Tom Paciorek and Greg Walker played 400 to 500 innings at the position that year. On August 23rd, he played third base, becoming the first left-handed third baseman in more than 50 years. The next year, on April 22, 1984, he took the mound against the Detroit Tigers. He retired the only batter he faced, getting Tom Brookens to fly out to left field, as Chicago lost 9-1.

After his playing career ended, Squires was a Toronto Blue Jays coach from 1989 to 1991 and was a member of the White Sox staff in 1992. After two years as a White Sox scout, he was a St. Louis Cardinals scout from 1995 to 2008. After that, he was a special assistant to Cincinnati Reds General Manager Walt Jocketty.