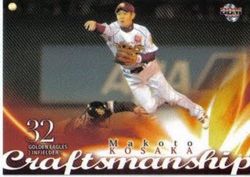 Makoto Kosaka is a former Rookie of the Year and multiple Gold Glove winner in Japan.

Kosaka played for Japan Rail Higashi Nihon Tohoku in the industrial leagues after high school. He was picked in the 5th round in 1995 by the Chiba Lotte Marines. In his first pro game, he reached base all five times he came up, the first player ever to do that in Japan.

As a rookie in 1997, Kosaka became Chiba Lotte's starting shortstop, allowing Koichi Hori to move to second base. Hori hit .261/.328/.323 with 7 triples and 56 steals in 72 attempts. He set the Nippon Pro Baseball rookie record for steals and also set the Chiba Lotte record. His lone homer as a rookie came off Akira Okamoto. The youngster tied for second in the Pacific League in triples, 6 behind leader Kazuo Matsui and was second to Matsui in swipes. Kosaka was named the circuit's Rookie of the Year and made his first All-Star team as well.

Kosaka fell to .238/.334/.299 in 2000 and stole 33 bases in 44 tries. Makoto paced the league in both steals (4 more than Matsui) and times caught stealing. He made the All-Star team and won a Gold Glove. Makoto batted .260/.350/.325 in 2001 and stole 32 bases in 41 tries. He led the league in plate appearances (657), times caught stealing and triples (8, tied with Hiroyuki Shibata. He was 12 steals behind leader Tadahito Iguchi, his furthest from the lead in some time. He made his 4th and final All-Star team while also taking his third straight Gold Glove.

In 2003, Kosaka hit .258/.326/.343 and stole 27 bases in 34 tries. He was not among the top 3 in steals for the first time in which he had played a full season. He had 7 triples, tying Naoyuki Omura for third in the circuit behind Arihito Muramatsu and Munenori Kawasaki.

Kosaka hit .252/.336/.326 in 2004 and stole only 6 times in 14 tries. The Marines began spelling him regularly with up-and-coming Tsuyoshi Nishioka. In 2005, Makoto batted .283/.353/.402 with 26 steals in 37 tries. He tied Saburo Omura for second in the league with 6 triples, behind Nishioka, and was third in swipes behind Nishioka and Saburo Omura. Kosaka oddly won the Gold Glove at shortstop while his teammate Nishioka made the Best Nine there, a very odd occurrence; Nishioka, meanwhile, won the Gold Glove at second base, where he alternated with Hori. This was obviously a testament to Nishioka's versatility as well as to how well Bobby Valentine juggled his three middle infielders. Kosaka did not play in the 2005 Japan Series as Valentine went full-time to Nishioka at SS.