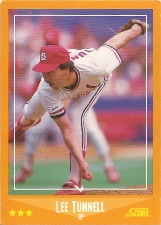 Lee Tunnell spent three seasons in Japan (1991-1993), then returned to the states and spent two years in the minors, including part of 1995 in Mexico.

Tunnell was slated to be the Louisville Bats pitching coach in 2006, but was named Cincinnati Reds interim Bullpen Coach for the season to fill in for Tom Hume, who was interim Pitching Coach in place of Vern Ruhle, who was ill.

In 2011, Tunnell was the Milwaukee Brewers' roving pitching coordinator. In 2013, he was named the team's bullpen coach, succeeding Stan Kyles. He was let go after the 2018 season. He moved back to the Cincinnati Reds as bullpen coach in 2019.

His son, James Tunnell, was selected in the 2008 amateur draft.