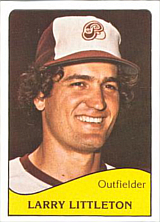 Larry Littleton and Mike Potter hold the all-time non-pitcher record of most career ABs without a hit. Both went 0 for 23. Randy Tate, 0 for 41, holds the pitcher record. Littleton's stint was with the Cleveland Indians during the first couple of months of the 1981 season.

Littleton is the cousin of Gordy Coleman.

Littleton came out of the University of Georgia, after being picked in the secondary phase of the January 1976 draft. The University of Georgia had gone quite a while without having a major leaguer, after having quite a few between 1910 and 1960. Jim Umbricht played through 1963, and was the only player from the school in the majors from 1960 to 1980. Littleton broke the drought by coming to the majors in 1981 and Glenn Davis followed in 1984.

He played in the minors from 1976 to 1983, including the Toledo Mud Hens for part of 1982. After baseball he worked for Merrill Lynch.