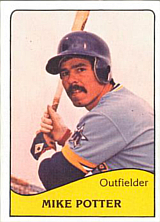 Potter made his major league debut on September 6, 1976, at the age of 25. Facing pitcher Steve Dunning of the Montreal Expos, Potter went 0-for-3 with two strikeouts in his big league debut.

Larry Littleton and Mike hold the all-time non-pitcher record of most career ABs without a hit. Both went 0 for 23. Randy Tate, 0 for 41, holds the pitcher record.

Potter returned to the minors after 1977 to bring his big league career to a close. In the 1978 minor league season, Potter hit 22 home runs and drove in 94 RBI. On October 27th of that year, he was sent by the Cardinals to the Seattle Mariners to complete an earlier trade made on June 26th. Originally, the Cardinals sent a player to be named later to the Mariners for Jose Baez. He hit only 5 home runs in 117 minor league games in 1979.