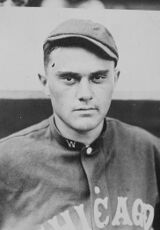 "In July 1918, while leading the Class AA Pacific Coast League with a .325 average, Chappell left the Bees to join the U.S. Army Medical Corps at Letterman General Hospital in San Francisco. Chappell contracted influenza and died there, at the age of 28." - from an article at MLB.com called 'MLB Stars Who Earned Their Stripes', May 29, 2016 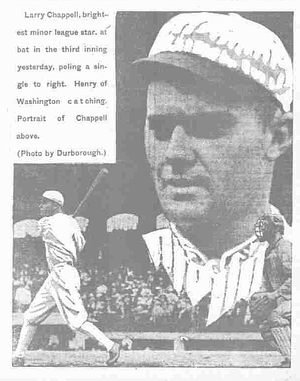 Chappell from a newspaper article in 1913

Larry Chappell saw action in five consecutive seasons, 1913 to 1917. The majority of his work came in left field with the Chicago White Sox in '13, batting .231 with 20 runs scored in 60 games (208 at bats). On February 14, 1916, he was sent to the Cleveland Indians as the player to be named later to complete a trade that originally occurred August 21, 1915. In all, the Indians received Chappell, Braggo Roth, Ed Klepfer and $31,500. The White Sox merely received the legendary Shoeless Joe Jackson. Chappell was the most expensive of the players sent to the Indians – he was an $18,000 bonus player. Coincidentally, he was sold for $18,000 to the Boston Braves after 3 games with Cleveland, finishing his career with 24 games over the next two seasons.

Larry died at 28 in an army camp from the flu that was ravaging the country at the time. He is buried in Oak Grove Cemetery in Jerseyville, IL. He is not to be confused with a contemporary of a similar name, Bill Chappelle.