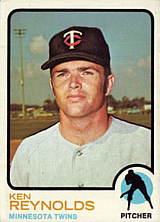 Ken Reynolds was a journeyman southpaw who saw most of his service with the Philadelphia Phillies of 1971 and 1972. Pitching for poor teams, Reynolds had a 7-29 lifetime record.

He is the first and only major leaguer from New Mexico Highlands University, located in northern New Mexico. He attended Marlborough High School in Marlborough, MA and after his playing career returned there as a physical education teacher. In high school and college, he pitched left-handed and played the outfield right-handed. The Phillies allowed him to play some outfield after drafting him in the 4th round of the 1966 amateur draft; he also did some pinch-hitting and pinch-running, but in the majors, he was strictly a pitcher.

After his major league career, he was a player/coach for two years in the Toronto Blue Jays organization (he had been with the Hawaii Islanders, managed by inaugural Jays manager Roy Hartsfield, in 1976, and joined a number of his former teammates with that team who moved over to the Jays, including John Scott, Dave Roberts, Jerry Johnson, Chuck Hartenstein and Dave Hilton.

In its 1971 baseball card set, Topps had a bit of fun, putting out a rookie card featuring three pitching prospects: Archie Reynolds of the California Angels, Bob Reynolds of the Montreal Expos and Ken. All three eventually had enough of a career to get pictured on their own cards in a future set.