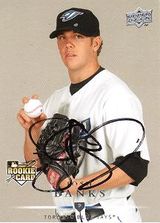 Josh Banks was drafted by the Baltimore Orioles in the 34th round of the 2000 amateur draft but did not sign. He was then signed by the Toronto Blue Jays and scout Tony Arias as the 2nd round pick in the 2003 amateur draft.

Banks made his Major League debut on September 11, 2007. That year, he pitched in 3 games and posted a 7.36 ERA without a decision.

After a rather unremarkable career as a conventional pitcher, Banks reinvented himself as a knuckleballer in the early 2010s and attracted some positive attention. The Toronto Blue Jays signed him to a minor league contract with an invitation to their 2014 spring training. They were not expecting him to make the team, but wanted him to work with some of the organization's catchers in order to give them practical experience in handling the tricky pitch, what with staff ace R.A. Dickey using it as his bread and butter pitch. He failed to impress enough to be given an opportunity to pitch in the team's system and retired for good.