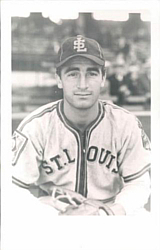 "I probably should have quit baseball in 1947, which was 10 years after I signed with Browns scout Jacques Fournier. Then I could have become a full-time actor five years before I did, resuming the career I began as a nine-year-old in Los Angeles. But then I wouldn't have had the distinction of playing for two of the worst teams of the postwar era, the St. Louis Browns and the Pittsburgh Pirates. Twice! When I was in my twenties it was exciting just being in the big leagues, no matter what the Browns did. But I had turned 30, and the constant losing became demoralizing. I waited for the season to end..." - Johnny Berardino to Danny Peary in the 1994 book We Played the Game

Despite playing in the majors for more than a decade, middle infielder Johnny Berardino is best remembered by many as a soap opera actor.

Johnny played college ball at USC, which later became a dominant program, and came up with the St. Louis Browns in 1939. The next season, 1940, he hit 16 home runs, and his 85 RBI were second on the team. In 1941, his 89 RBI were also second on the club. He served the next several years in the military in World War II and missed the Browns' 1944 trip to the World Series. Berardino entered the Air Force in January 1942 and was discharged in June 1942. He then enlisted in the Navy in September 1942 and was discharged in October 1945. He returned to the Browns in 1946 and, that year, his 29 doubles led the team while his 68 RBI were second. He went on to play for the Cleveland Indians and Pittsburgh Pirates and was in the majors through 1952. During his career, Berardino played 453 games at second base, 266 games at shortstop, and 91 games at third base and was noted as having good range at second base. He made his first Baseball Card appearance in the now scarce 1941 W753 St. Louis Browns Team Issue.

Berardino returned to acting once his baseball career ended. He played the role of "Dr. Steve Hardy" on the daytime soap opera General Hospital from its debut in 1963 until his death in 1996. He is, to date, the only man to win a World Series (1948 with the Indians) and have a star on the Hollywood Walk of Fame (honored in 1993). Teammate Al Zarilla recalled that Berardino used to amuse the Browns players with skits and soliloquies many years before he became an actor. He did not play against another ballplayer-actor, The Rifleman Chuck Connors, since they were in different leagues during the two years when Connors was in the majors.