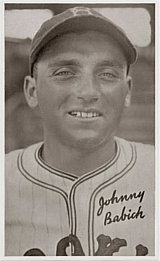 "Al Lyons, who moved to the Pirates this year from the Yankees, tells an anecdote about Johnny Babich, the pitcher, who had a brief trial with the Yankees. Babich didn't do very well and, after the tryout, the Yankees let him go. He wound up with the Athletics. One day when the Athletics played the Yankees, Connie Mack named Babich the pitcher. Inning after inning Babich set the Yankees sluggers down with an ease that had manager Joe McCarthy tearing his thinning hair. After Joe Gordon fanned, slammed his bat down disgustedly and returned to the bench, McCarthy asked 'What has that guy got, anyway?' 'I dunno,' retorted Gordon, 'but whatever it is, it's something our scouts missed." - Vince Johnson, Pittsburgh Post-Gazette, from a reprinted article in Baseball Digest, November 1949

Pitcher Johnny Babich grew up in the San Francisco area and began his pro career with the city's Seals of the Pacific Coast League in 1931. In 1933, he was traded to the San Francisco Missions and went on to win 20 games. He won 10 games in 1934 before being acquired by the Brooklyn Dodgers, for whom he was 7-11 as a big league rookie. After posting a 6.66 ERA for the Dodgers in 1935, he was sent back down to the minors. The following year, 1936, Babich spent most of the season in the PCL and played 3 games for the Boston Bees. After going 19-17 with a 3.27 ERA for the Hollywood Stars in 1938, he was acquired by the New York Yankees, who sent him to the minor league Kansas City Blues. One year later, he was acquired by the Philadelphia Athletics in the 1939 Rule V Draft. With the Athletics in 1940, he went 14-13 with a 3.73 ERA and posted a 5-0 record against the Yankees in helping them miss the pennant for the first time since 1935. He played one more year in the majors, going 2-7 for the Athletics in 1941.

Following his big league career, Babich managed in the minors and continued to pitch as well. He led the 1947 Stockton Ports to the California League title while going 5-2 on the mound.