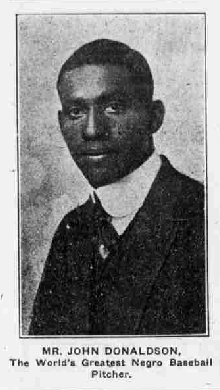 John Donaldson was considered one of the best left-handed pitchers in the Negro Leagues and also played the outfield at times. It is hard to judge his abilities as many of his statistics were compiled against weak white semipro teams, spending his heyday with the All-Nations club. John McGraw said that he would have earned $50,000 to play if he had been white. Donaldson's career record against other top black teams was 18-13. His best pitch was a curveball.

John debuted with the All-Nations in 1913. Among his impressive numbers against white semipro teams were 27 strikeouts in a 12-inning game in 1913 and 35 strikeouts in a 18-inning, 1-0 loss in 1915. He threw three straight no-hitters. Donaldson's first games against top black teams came in 1916 and he went 5-1. He spent 1916-1917 in the California Winter League but statistics are incomplete for that season. He fell to 1-3 and hit .286 against top black teams in 1917. He also spent part of that year with the US 365th Infantry. That year, he had been offered $10,000 to play in the New York State League if he would change his name and claim to be Cuban.

Donaldson continued to play with semipro teams for the most of the 1920s. He later worked in the post office and, after integration, as a Chicago White Sox scout, but resigned when the team would not allow him to sign younger black players like Willie Mays. John was known for his morals off the field and didn't drink. Donaldson made the final ballot in the 2006 Special Committee on the Negro Leagues Election.

According to a Kansas City newspaper, he married a Miss Eleanor Watson on November 7, 1917. See [1]