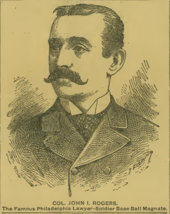 John Rogers was an owner for a couple of decades.

Rogers served as the attorney for the National League, helped revise the National Agreement in 1885 and worked on legal mechanisms to fight back the Players League challenge. He helped lead the building of the Baker Bowl. An arrogant man, he got into conflict with other NL owners, notably Jim Hart of Chicago when Rogers was the lone person refusing to expel St. Louis in 1899. He also clashed with Reach over Rogers' handling of Phillies players jumping to the new Philadelphia A's of the American League, most notably Nap Lajoie. In 1903, Rogers and Reach sold the Phillies, though Rogers remained co-owner of the Baker Bowl until 1909. He died the next year of a heart attack while traveling to Denver, CO.