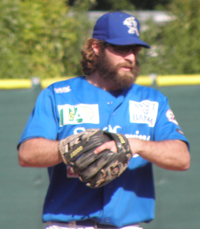 Joe Mazzuca has played in the minor leagues and in Italy.

Joe was 3 for 9 with 2 triples and 3 walks in the 2007 European Championship as a utility man for Italy. He was a backup infielder for them in the 2007 Baseball World Cup, going 1 for 5; he subbed for Jack Santora at short, Davide Dallospedale at second and Giuseppe Mazzanti at first.

In the 2010 European Cup, he was 4 for 18 with a double, run, walk and four RBI but three errors in 15 chances for Bologna in round one, playing mainly 3B. In the finals (won by Bologna), he was replaced at 3B by Eddy Garabito. In the 2010 Italian Baseball League, he hit .252/.346/.394 with 13 doubles but fielded only .884 at the hot corner. He tied Olmo Rosario for third in the loop in two-baggers. In the 2010 Italian Series, he played seven error-free games and came up with some big hits but hit .208/.375/.375 with 4 runs and 4 RBI overall and Bologna fell to Parma. In the 2010 European Championship, he went 3 for 12 in a part-time role; he was 0 for 2 as the starting DH in the Gold Medal game before being replaced by Lorenzo Avagnina but the Italians still won the title over the Dutch national team. He remained with Italy for the 2010 Intercontinental Cup (his last appearance for an Italian team through 2013), going 2 for 3 with a walk, run and a RBI as a backup to Alex Sambucci at 1B. He did not play in the Bronze Medal game as Italy beat host Taiwan for their first medal in a global baseball tournament.

He was 4 for 20 with a walk, two runs and a RBI in round one of the 2014 European Cup but San Marino advanced to the finals, where he went 4 for 11 with a double, homer, three runs and three RBI in three games to power San Marino past Rimini. He was named the Cup finals MVP.