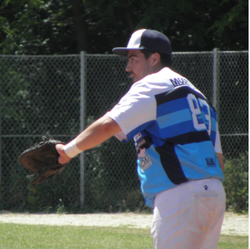 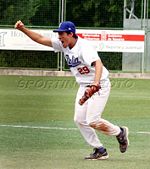 In 2009, Sambucci made it to the Italian Baseball League with Parma. He hit only .220/.279/.386 but went deep 5 times in 132 AB, leading his club. He was listed as one of Italy's potential players for the 2009 Baseball World Cup but did not make the final cut. He fell to .222/.289/.299 in 2010. He still made Italy's squad for the 2010 Intercontinental Cup and started at 1B. He batted .250/.375/.300 with 3 runs and 1 RBI in 7 games, handling 63 chances error-free, entering the Bronze Medal Game. He scored the winning run in the 9th against Nicaragua, singling off Carlos Perez and scoring on a Juan Carlos Infante home run. He scored the winning runs against Japan's Katsuki Akagawa and South Korea as well. Entering the placement games, he tied future AL MVP José Abreu for the tournament lead in most chances without an error. He was 0 for 3 with a walk in the Bronze Medal Game but Italy won its only medal in an Intercontinental Cup.

Alex starred for Parma in the 2011 European Cup's opening round, with a homer off Keino Perez of the Rouen Huskies and going 4 for 4 with 3 runs and 3 RBI against Draci Brno. He hit .412/.476/.647 with 5 runs and 6 RBI in 5 games, handling 44 chances without a miscue. He was among the leaders in the Parma pool in average (tied Tom Brice for 6th), slugging (3rd, after Rodney Medina and Jeffrey Arends), OBP (tied for 5th with Riccardo Suardi), runs (tied Willie Vásquez for 4th), RBI (tied Medina and Arends for 2nd, one behind Jairo Ramos Gizzi), homers (tied for 1st, 1), total bases (11, tied for 3rd with Luca Scalera and Anthony Granato) and double plays turned (6, tied Richard Montiel for 1st). He did not appear in the Cup Final Four, with Leonardo Zileri playing 1st instead for Parma. His regular season performance in the 2011 IBL was not that good - .222/.296/.314.

Playing for Italy in the 2014 European Championship, he started at first. Entering the Gold Medal Game, he had batted .296/.441/.556 with 8 runs and 6 RBI in 8 games, homering twice (off Belgium's Steve De Saedeleer and Sweden's Kent Karlsson. His 56 error-free chances led all players (six ahead of Andy Paz and Jon Cramman), while his 7 double plays turned tied Felix Brown and Infante for 5th. In the Gold Medal Game, he struggled from the cleanup spot, striking out twice against the Netherlands' Rob Cordemans and then once again David Bergman while also making a rare error in the field, then was replaced by Gabriele Ermini late in the 6-3 loss.

The big infielder moved to Fortitudo Bologna for 2015. He hit .350/.435/.350 with six runs in five games in the first round of the 2015 European Cup, handling 46 chances error-free; he had a three-hit game against the Solingen Alligators. He tied Infante, Markus Stryczek and Guillermo Rodríguez for 6th in runs and only Dustin Hughes had more chances with a 1.000 fielding. In the final phase, he was 4 for 11 with a walk, finishing 6th in average and hits while leading with 31 error-free chances (8 ahead of Rien Vernooij).

Alex batted .231/.333/.308 in the 2016 European Champions Cup going into the 3rd/4th place game and had handled 38 chances without an error. He scored the game-winning run against Heidenheim Heideköpfe, drawing a walk from Marcel Giraud and scoring on a Paolino Ambrosino hit. Martin Mužík and Simone Albanese also had 1.000 fielding percentages, in more chances. In the 3rd/4th place game, he had 10 putouts and one assist while going 1 for 5 in a 7-6 win over Neptunus.

That summer in Italy, he led the league with 30 RBI (the B-R register has incomplete stats). He hit a big three-run shot off José Escalona in Game 3 of the 2016 Italian Series and Bologna would win the title. In the 2016 European Championship, he struggled at .174/.344/.174 entering the placement games but did score six runs in eight games, including three against Croatia. He again played flawless defense (in 55 chances). He tied Blake Ochoa for 2nd-most chances by someone with no errors, behind Curt Smith. He also tied for 5th in walks (6), tied for 2nd with two sacrifice flies (one behind Max Boldt). Against the Netherlands, he pinch-hit for Mattia Mercuri and hit a sac fly off Kevin Kelly to put Italy ahead, 5-3, in the 10th, but they did not hold on and they finished with the Bronze Medal.

At the 2017 European Champions Cup, he had three runs in a loss to Neptunus and three hits in a win over Rouen (including a homer off Yoann Vaugelade). He was 1 for 3 with a walk and a run in the finale, another loss to Neptunus. For the Cup, he hit .533/.667/.867 with seven RBI in five games, with 37 putouts, 6 assists and no errors. He tied Jonathan Jaspe for 2nd in average (.032 behind Ambrosino), was 4th in total chances by someone without an error (between Francesco Imperiali and Martin Kipphan), was second in slugging (behind Gabriel Fromental-Houle), led in OBP (.039 ahead of Ambrosino), tied for 3rd in hits (one behind Ambrosino and future MLBer Robel García), tied Ambrosino and Gianison Boekhoudt for 3rd in RBI and tied for 2nd with 12 total bases (two behind García).

In the 2021 European Champions Cup, he split 1B and DH with Cesare Astorri. He hit a three-run homer off Murilo Gouvêa of defending champion Bologna in a 5-4 semifinal win. In the finale, he took Christian Tomsich of the Bonn Capitals deep in the 4th to break a 3-3 tie. With a 4-3 lead the next inning, he doubled off Samuel Steigert to score Astorri then came around to score in a 6-4 victory; it was Parma's first European Cup win of the 21st Century after 13 titles in the 20th Century. He had also previously gone deep off the Amsterdam Pirates' Kevin Geestman. He finished the event at .333/.455/.944 with the 3 homers, 6 runs and 7 RBI in 5 games. In a high-offense Cup, he only tied for 5th in home runs, was 9th in slugging and tied for 5th in total bases (17) with Lampe and Gary Owens. Given his clutch hits, though, he was named Cup MVP.