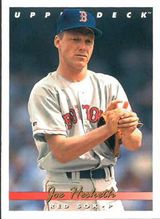 Joe Hesketh was signed as a 2nd round pick in the 1980 amateur draft by the Montreal Expos and scout Al Harper. After his playing career, Hesketh became the pitching coach at the State University of New York at Buffalo in 2007.

Hesketh had a very good first taste of the majors when he was brought up by the Expos late in the 1984 season. He went 2-2, 1.80 with a save in 11 games, one of the wins being a complete game shutout. In an unusual twist, in his big league debut on August 7th, he was charged with a balk before throwing his first pitch. He was enjoying a strong rookie season for the Expos in 1985 until it ended abruptly. On August 23rd, he had a 10-5 record with a 2.49 ERA but that afternoon, though, the wiry pitcher tried to bowl over Mike Scioscia of the Los Angeles Dodgers in a play at the plate. Scioscia, who was known for his plate-blocking skills, said that Hesketh would have been safe if he had slid. Instead, he suffered a season-ending broken leg. He came back at the start of the 1986 season and was 6-5 after 15 starts, although he had a 5.01 ERA. His season ended early again, this time because of a pulled muscle in his back. It took him a long time to recover, as he did not return to the majors until the end of the 1987 season. The Expos decided to make him a reliever, thinking that he was too frail to start on a regular basis in the majors.

Joe started only two games in 166 big-league appearances from 1987 through 1990. He had a very good season in 1988, as he went 4-3, 2.85 with 9 saves in 60 games. In 1989, however, his ERA ballooned to 5.77, mainly the result of a handful of awful outings in which he gave up a ton of runs; he pitched well at other times and ended with a 6-4 record and 3 saves. He made the team at the start of the 1990 season because teams could carry a couple of extra players for the first month of the year, as a result of a strike which had cut spring training short. However, he only pitched 3 innings for the Expos before being one of the cuts made to trim the roster back to 25 players on April 30th. He was placed on waivers and picked by the Atlanta Braves but put up a 5.81 ERA in 31 games and was let go again in late July. He then joined the Boston Red Sox and pitched better over the last two months of the season, going 0-4 but with a 3.51 ERA.

As a swingman for the Red Sox in 1991, he posted a career-high 12 wins and led the American League in winning percentage. He was not as effective as a full-time starter in 1992, however, falling to 8-9, 4.36. He pitched a couple other seasons for the Sox, finishing up with a record of 8-5, 4.26 in 1994, after which the 1994 strike wiped out the remainder of the season, As a result, he made his final major league appearance ten years to the day after his debut.