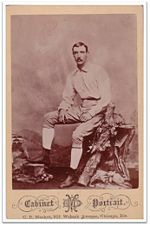 There is conflicting information as to where Jimmy Wood was born. He may have been the first Canadian in the major leagues, although his death certificate lists his place of birth as Brooklyn, NY in 1842; the 1850 census has his family living in New York City, but all of its members are listed as having been born in England (which, in those days before the Canadian Confederation, may have referred to Canada as well as across the pond). To complicate matters further, a contemporary newspaper lists his date of birth as being in 1843.

What is certain is that Wood played for the amateur Brooklyn Eckfords starting in 1857. He left them to live in Ohio, and eventually ended up playing for Chicago's first professional team, who were considered the national champions at the time. As a result, he managed and played for the 1871 Chicago White Stockings when the National Association was formed.

He was a star player in the early National Association, hitting .378 for the White Stockings in 1871 and .321 for the Philadelphia Whites in 1873. He was also the captain (i.e. manager) of those teams. In 1874, he decided to treat an abscess on his leg with a pocket knife; an infection resulted and his leg was amputated, ending his playing career. He continued as a manager for two seasons after the amputation, both with the White Stockings. In addition to his playing career, he umpired two National Association games in 1871 and two National League games in 1876.

After his baseball career, Jimmy Wood moved to Florida and invested in citrus groves; his daughter Carrie married William Temple, who became president of the Pittsburgh Pirates and in 1894 donated the Temple Cup to the winner of a post-season series between the two best teams in the National League. His granddaughter, Dorothy Temple, married pitcher Del Mason.

Yet, for all these continuing connections to the game, Wood's later whereabouts were long lost in a fog. As early as 1963, Hall of Fame historian Lee Allen listed him as one of his missing players in his column in the Sporting News. In 2006, SABR member Peter Morris was able to trace Wood's death certificate in San Francisco, CA (speculation was that he had died in Brooklyn, so his death on the other side of the continent was quite a surprise). He never lived in California, but apparently he traveled there for a cataract operation. To further complicate things, he was buried in Greenwood Cemetery in New Orleans, LA, next to his son.

This manager's article is missing a managerial chart. To make this person's article more complete, one should be added.
This biographical article is missing the person's: batting hand
Retrieved from "https://www.baseball-reference.com/bpv/index.php?title=Jimmy_Wood&oldid=1120186"
Categories: