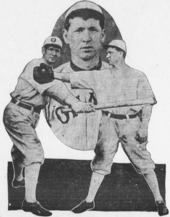 Jim Kane was one of several players who got playing time at first base with the 1908 Pittsburgh Pirates. Harry Swacina, who had the most at-bats, spent much time out as a result of a groin operation.

Although Kane's average was only .241, it was the deadball era and the league hit .239.

At age 26, Kane was the same age as Swacina and eight years younger than Honus Wagner.