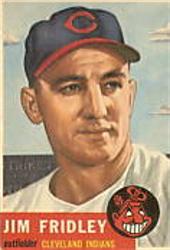 Jim Fridley was a World War II Veteran who served four years in the United States Army. Before the 1948 season, was signed by the Cleveland Indians as an amateur free agent. The 6'2" outfielder, who at the time of signing was enrolled at West Virginia University on a football scholarship, was assigned to the Burlington Indians of the class C Central Association where he appeared in 120 games and hit for a .263 batting average.

Jim spent five seasons in the minors before getting his first look at major league pitching as a 27-year-old rookie in 1952. On April 16th that year, Sugar Ray Robinson knocked out Rocky Graziano in Chicago, IL to retain the middleweight boxing title. The rookie outfielder was in attendance at the fight with his ticket courtesy of Indians teammate Bob Lemon. Playing in his first big league game that afternoon, Jim's first base hit was a home run off Joe Dobson of the Chicago White Sox at Comiskey Park to give Lemon and the Indians a 1-0 opening day victory.

Two weeks later, on April 29th, in a game against the Philadelphia Athletics in Philadelphia, PA, "Big Jim" became the first rookie in major league history to ever have a 6-for-6 day at the plate. But before the end of the 1952 campaign, he had been returned to the minor leagues.

Jim was back in the American League with the Baltimore Orioles in 1954, and in the National League with the Cincinnati Redlegs in 1958. He won the Southern Association batting title with a .348 average with the Nashville Vols during the latter year. This would be Jim's last trip to the majors, winding up with 3 seasons and appearing in 152 games with a career .248 batting average.

"Big Jim" spent three more seasons in the minors (1959-1961) and decided at the age of 37 he had been around pro baseball long enough and called it quits after the 1961 season. Fridley had put up some good numbers during his minor league career. He appeared in 1,631 contests, went to bat 5,824 times, chalked up 1,725 base hits, including 210 home runs, for a minor league career batting average of .296.

Fridley, who was a supervisor for the Kimberly-Clark Paper Mill in Dayton, OH, retired to Port Charlotte, FL, where he died on February 28, 2003, at age 78.