Jiggs Donahue was noted for his defensive skills at first base and was a key member of the "Hitless Wonders" Chicago White Sox team that won the 1906 World Series.

Originally a catcher, Donahue began his pro career in the minors in 1898. He broke in on the major league level with the 1900 Pittsburgh Pirates as one of the youngest players in the National League (and was six years younger than teammate Honus Wagner). In 1901, he played in two games for the Pirates, spent part of the year with the minor league Minneapolis Millers, and was signed by the Milwaukee Brewers of the newly formed American League in July. He hit .318 in 37 games with the Brewers and remained with the club when they moved and became the St. Louis Browns in 1902. 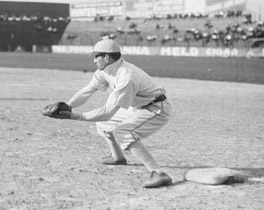 After a stint with the Milwaukee Brewers of the American Association, with whom he was converted to first base, Donahue's contract was purchased by the White Sox. For five seasons, he was Chicago's regular first baseman, and his forte became his defense, as he led AL first basemen in fielding three times. In 1905, he also finished in the top ten in several offensive categories, most notably being third in the league with 76 RBI. He also demonstrated speed on the basepaths, stealing 32 bases that season and 36 the next year. In 1906, he was one of the few offensive bright spots of the "Hitless Wonders" club that reached the World Series. In that Series against the crosstown Chicago Cubs, he broke up Ed Reulbach's no-hitter bid in Game Two and batted .333 as the Sox defeated the Cubs in six games.

In 1907, Donahue set the major league record with 1846 putouts, a mark that still stands to this day. That year, he led the league in games played and at-bats, which helped him set the record. The following season, he recorded 21 putouts in a nine inning game against the Detroit Tigers on May 31st.

In 1909, Donahue was traded to the Washington Senators, and he finished his major league career there as a teammate of the young Walter Johnson.

After baseball Donahue owned bowling alleys. He died in 1913 after being in the State Hospital in Ohio for a year; his obituary in the New York Times called it an "asylum" and said that domestic trouble had "undermined his health". Various other sources say he had syphilis.

Donahue's brother Pat Donahue played in the American League from 1908 to 1910, primarily as a catcher.

Jiggs is one of several players with the first name "Jiggs", all playing at approximately the turn of the century.