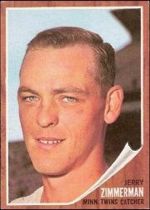 Jerry Zimmerman was one of the original coaches of the expansion Montreal Expos in 1969. He remained with the club through 1975. He was also a coach for the Minnesota Twins from 1976 to 1980. In both stops, he was working for manager Gene Mauch.

When the major league umpires staged a one-day strike on August 25, 1978, Zimmerman and Toronto Blue Jays coach Don Leppert were pressed into duty to help out the three amateur umpires working that day's game. Leppert umpired at second base and Zimmerman at third base, as it was felt fairer to use one coach from each team and have five umpires, rather than stage the game with only three umps, all amateurs.