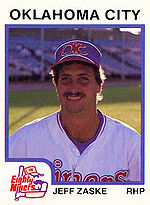 In April 1980, Jeff Zaske was involved in an incident with temperamental teammate Bill Madlock. During a batting practice session that Zaske was pitching, Madlock kept yelling at the hurler to "throw harder!" Other teammates, including star outfielder Dave Parker, yelled at Zaske to "hit him." On his next pitch, Zaske threw inside and grazed Madlock's left arm, after which Madlock walked to the mound and punched Zaske. After the ordeal, Zaske explained "they told me to," when asked why he hit Madlock. Madlock apologized for punching Zaske at a later date.