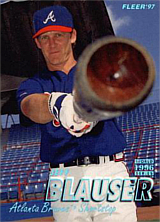 Jeff Blauser was by far the most successful player to come out of the first round of the secondary phase in the 1984 draft. Of the few from that group who made the major leagues, only Blauser has a career WAR above one. He was primarily a shortstop during a 13-year major league career spent with the Atlanta Braves and Chicago Cubs, from 1987 to 1999.

He managed the Mississippi Braves of the Southern League in 2006.