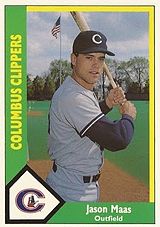 The brother of Kevin Maas, outfielder Jason Maas reached AAA but did not make the major leagues.

In 1988, Jason hit .271/.351/.363 for the Albany-Colonie Yankees with 8 triples and 15 steals in 20 tries. While his brother again made the league All-Star team, Jason had played a role once more in helping his club win the pennant, topping the Eastern League. Returning to Albany in 1989, he improved to .296/.394/.385 with 24 steals in 31 tries and 61 walks. He won yet another pennant. Maas was fourth in the EL in average, behind Jim Leyritz, Wes Chamberlain and Beau Allred. He was third in OBP, trailing Leyritz and Leo Gomez. He failed to make the EL All-Star outfield as Allred, Chamberlain and Joey Belle were picked.

Maas spent his last two seasons with the Columbus Clippers. He hit .248/.360/.367 with 13 steals (never caught) in 1990, splitting time with Van Snider, Oscar Azocar, Hensley Meulens and John Fishel. He began 1991 hot with Columbus at .352/.459/.507 in 30 games. When the Yankees did not promote him (their outfield consisted of Mel Hall, Jesse Barfield, Bernie Williams, Roberto Kelly and Meulens), he asked to be released, to try his chances elsewhere. New York refused to release him and Jason retired from baseball. His brother said that the Yankees "never treated [Jason] well"

This biographical article is missing the person's: birth place
Retrieved from "https://www.baseball-reference.com/bpv/index.php?title=Jason_Maas&oldid=1226501"
Categories: