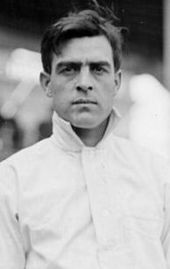 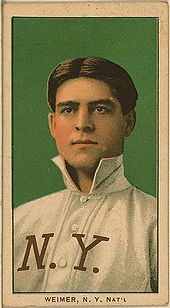 Tornado Jake Weimer has one of the lowest ERA's in major league history. In seven seasons in the majors, he posted a 2.23 ERA, twelfth-best of all time. He also won 20 games three times.

In spite of being a good pitcher for the Chicago Cubs in 1903-05, he was traded after the 1905 season in a deal that brough Harry Steinfeldt to the Cubs. Thus, Jake missed the great Cub years when they won the pennant in 1906-08 and 1910. He was, however, close to turning 32 years of age when he was traded, and the Cubs had a full set of excellent pitchers.

Weimer had started in the minors as early as 1895, and so was a veteran pitcher by the time he broke into the majors at age 29.

According to an article in the July 12, 1908 New York Times, when Weimer was traded from the Cincinnati Reds to the New York Giants, he refused to report unless he was paid half of the money involved in the deal. He said that otherwise he would leave baseball and go into business with his father-in-law in Chicago, IL.

In 1907, he led the National League in hit batsmen with 23 and also set a Reds record with 4 in one game. That record was not matched until Josh Smith also plunked 4 batters in a game in 2015. He worked a total of three National League games as a fill-in umpire, two in 1905 and one in 1907.

In 1909 and 1910 Weimer played as an outfielder for the New Orleans Pelicans, where he was a teammate of Joe Jackson in 1910.

Through 2019, he and Hideo Nomo are the only two big leaguers who have been given the nickname "Tornado".