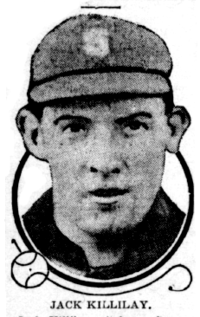 Jack Killilay, who went 4-2 during his time with the Boston Red Sox in 1911, won 145 games in the minors. Perhaps his most notable minor league season was 1910, when he went 24-10 for the Spokane Indians. After his major league 1911 season, he went 15-4 in 1912 for the Oakland Oaks in the first of three seasons that he spent with the team.

One of Killilay's wins for Spokane was a no-hitter, and his 75 victories in four years with Spokane is still the team record.

An article in Sport Magazine from April 1953, about Mickey Mantle, mentions Killilay as desk clerk at the Miami Hotel (the article is not completely clear as to whether it is in Commerce, OK or Baxter Springs, OK which are only 12 miles apart) talking about how much Mantle's fame had changed the small town.