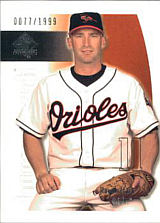 Howie Clark was originally selected by the Baltimore Orioles in the 27th round of the 1992 amateur draft. He made a slow and steady climb through the Orioles farm system, culminating with his O's debut in 2002 for 14 games at 28. By then a utility player, Clark scraped together a short MLB career, playing 134 games and hitting .262 over 6 seasons with 3 teams. This included two distinct stints with both the Orioles and the Toronto Blue Jays.

His most memorable big league moment came with the Blue Jays. In a game on May 30, 2007, his first of the season (and first since July 6, 2006 at the big league level), Howie let an easy pop-up drop after becoming distracted by Alex Rodriguez yelling like a goober, thinking it was fellow infielder John McDonald calling him off the ball. Jorge Posada was gifted a single by the book, part of a four-run inning in a game the Blue Jays dropped to the New York Yankees, 10-5.