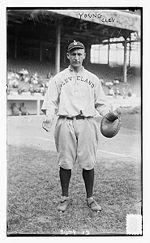 George Young was in only two games in the majors, both times coming in as a pinch-hitter. The Cleveland Naps were a strong team in 1913, going 86-66 for the year. George, at age 23, was two years younger than teammate Joe Jackson.

Although George did not play in the field with the Naps, he was primarily a catcher, as the photo above shows, and as his minor league career shows. He also served in the Army Air Service in World War I.